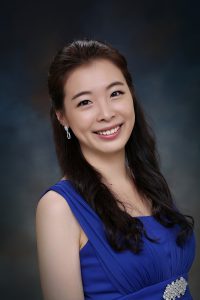 Korean soprano Young Eun Lee is a lyric coloratura and her singing has been described as “both sweet and flexible . . . crystaline and limpid.”

In 2017, Ms. Lee performed as Adele in J. Strauss’ Die Fledermaus in Lincoln Center and Carnegie Hall, New York and as Queen of the night in Mozart’s Die Zauberflöte in Opera America, New York with New York Lyric Opera Theater. In 2015-2016, she performed as Nannetta in Verdi’s Falstaff, as Lauretta in Puccini’s Gianni Schicchi, partial role of Gilda in Verdi’s Rigoletto with La Musica Lirica in Novafeltria, Italy; as Amore in Cavalli’s Egisto with Peabody Chamber Opera in Baltimore. Other previous roles include Fairy Godmother in Massenet’s Cendrillon with Peabody Opera Theatre, First Lady and Papagena in Mozart’s Die Zauberflöte, Susanna in Mozart’s Le Nozze di Figaro with Sungshin Women’s University in Seoul, South Korea.

She worked as a concert artist with Concert Artist of Baltimore under the baton of Maestro Edward Polochick. She served as a soloist at Basilica of the National Shrine and Holy Korean Martyrs Church.

Currently, Ms. Lee is pursuing her Doctor of Music Arts degree with Dr. John De Haan at the University of Minnesota. She received both her Graduate Performance Degree and Masters in Voice/Opera with Dr. Steven Rainbolt at the Peabody Institute of the Johns Hopkins University. She received her Bachelor of Music and Masters in vocal performance with Prof. Jihyun Park at the Sungshin Women’s University in South Korea.

In the spring of 2018, she will sing the role of Eurydice in Offenbach’s Orphée aux enfers with the University of Minnesota.